Yarrow is taking over an area I wanted to be my moon garden and I had to relocate the other herbs originally planted there. These included lavender, sage, and a pretty little Herman’s Pride dead nettle we got from the house of Brian’s Grandma when she passed away. They are spreading their lunar love in other beds across the property and all seem much happier now, plus I don’t mind the large crescent shaped yarrow patch.

The lore of plants is always so fascinating and nuanced. One day over lunch I read an article that mentions the use of yarrow as a charm for love and fidelity then later that evening I read about how yarrow is also know as “devil’s nettle” and “devil’s plaything.” During the Middle Ages it was thought to both summon and banish the devil, so I figure whatever way you want to spin it it’s a good plant to have around.

I always reference Culpepper’s Complete Herbal for his take on my plant friends and was really excited to see what he had to say. His entry was anti-climatic, although forever seemingly poetic since it was written in the 17th century.

You will see Achillea millefolium commonly growing in disturbed places as a weed. It has feathery leaves, a strong bitter scent, and is topped by a disc of small white flowers. I was originally introduced to yarrow through one of its many modern cultivars which comes in shades of pink, red, and yellow. Although these are lovely they do not contain the same medicinal properties as common white yarrow.

Perhaps its most well known use is healing wounds and it has earned the name soldier’s woundwort because throughout history it has been used to do just that in battle. In my garden, the yarrows are mostly ornamental although someday (maybe tomorrow) I  will get my act together to harvest and dry some to use as a febrifuge during the cold season. 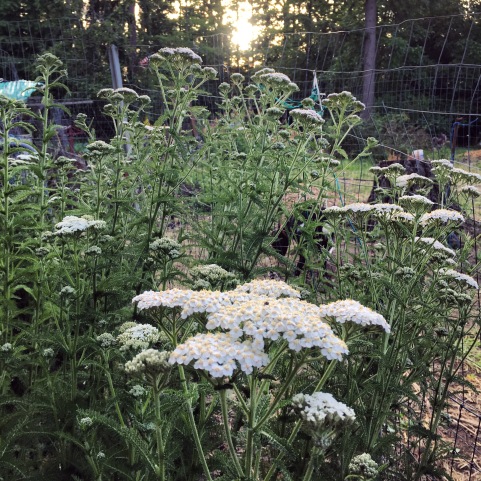